Over ten thousand years ago, during the last ice age, massive glaciers slowly moved through the mountains of Montana. As they crept along, they pushed large amounts of dirt, rock, and debris ahead of it. Toward the end of the ice age, the glaciers quickly retreated, leaving behind smaller glaciers. The smaller glaciers became trapped in the massive depression that the larger glaciers created, then began to melt, ultimately creating what we now call Lake McDonald. It sits in a U-shaped valley carved by the glaciers, stretching across ten miles and roughly 150 meters deep, it is the largest lake in Glacier National Park. Surrounding the lake on the north, south, and east are mountains capped with snow for majority of the year. Lining the shores of Lake McDonald are colorful rocks, ranging from dark red to blue.
The lake receives a large majority of its water from upper McDonald Creek. This small creek receives its water entirely from snowmelt, meaning the water is clear, cold, and lacks nutrients. As a result of this, the water in Lake McDonald is also very clear, cold, and has little to no nutrients. Unfortunately for fishers, the quality of fish in this lake is poor. Many years ago, the lake was an extraordinary place for catching bull trout, but the introduction of non-native species caused their population to decrease. As of today, though, the lake has an array of fish, including small cutthroat, rainbow trout, a couple of large bull trout, and multiple different lake trout. In this valley where Lake McDonald lies, other wildlife can be seen, such as bighorn sheep, mountain goats, black bears, elk, and deer. Along with these species are other forms of wildlife, like western red cedar and hemlock.
Before Lake McDonald became a tourist site, the Kootenai Indians would perform ceremonies at the foot of the lake. To this Indian tribe, the lake was a great place to dance and they believed it was just a place where people danced and performed. Therefore, this lake was named Lake McDonald, which to them meant “Sacred Dancing”. It is believed that the lake was named after a man by the name of Duncan McDonald who carved his name on a tree near the lake in 1878. Around the years 1913-1914, a lodge was built in the valley of Lake McDonald. To build this lodge, local materials such as stone and western red cedar were used. Since there was no railroad or roads nearby, the materials had to be transported by ferry in the summer or hauled across the frozen lake in the winter. Over the last 100 years, Lake McDonald has become a tourist attraction in which people can stay, fish, and learn about the history.
In 1910, Glacier National Park consisted of over 100 glaciers, but as of 2015, only a couple dozen remain. Unfortunately, due to the ever-changing climate, these glaciers are melting. Because temperatures are slowly getting warmer, more rain has fallen than snow, and as a result, more snow melts in the spring. As this trend in climate change continues, the loss of glaciers will result in water levels lowering, and Lake McDonald is no exception. As mentioned before, Lake McDonald consists of very cold water, but with the change in climate, the temperature of the water also gets warmer. Due to this, the number of fish and other aquatic species will be greatly reduced, which can greatly affect the aquatic food chain. All in all, the change in climate and the increase in temperature of the water will cause a decrease in diversity of aquatic wildlife in Lake McDonald.
​ 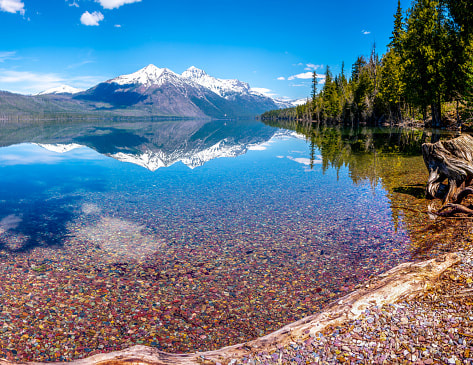